On the road to dream!
As from 1901 De Dion-Bouton, Mercedes-Benz, Peugeot, Renault were some of the six hundred legendary names from the history of the automotive industry that could be read over the booths at the Car Show staged in the Nave of the Grand Palais. Very soon, the Salon de l'auto became for the French the most eagerly awaited event on the calendar. For sixty years, the show was inseparable from the Grand Palais and established the building's lasting anchorage in innovation and modernity.
|
The first Car Show to be held in the Grand Palais marked the start of a long tradition and the public's unfailing attachment to an event that soon became emblematic of the Grand Palais. At the end of 1900, the automotive industry was flourishing: in France 2,884 four-seater cars, 5,286 2-seaters and 11,252 motor bikes were on the road, i.e. almost half of all the world's motor vehicles at the time.

Though this was not the first time that the car makers had exhibited their designs, the event now acquired world stature. Every year saw in new inventions: the automatic carburettor in 1904, the plate clutch in 1905, dampers in 1906.

The facades of the Grand Palais were aglow with light. As from 1910, the decoration of the Grand Palais, till then left to the initiative of each carmaker, was entrusted to the architect André Granet. For over half a century, his sensational "ephemeral settings were stunning light shows that left a deep impression on dazzled visitors". 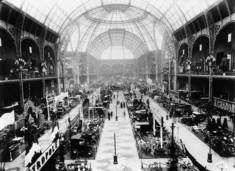 The first Motor Show in the Grand Palais, 1901. © Mondial de l’automobile
In a matter of years, the Salon drew long queues and record crowds. It provided the opportunity to find out about the latest technologies and trends in body design and comfort. The salon meant dreams for some, firm orders for others. In 1954 over a million visitors came to the show, drawn by its international reputation, and whose home remained the Nave until 1961. Times then changed and the car market had outgrown the capacity of the Grand Palais, which nonetheless remained firmly anchored in the daily lives of the French people.
Mots-clés